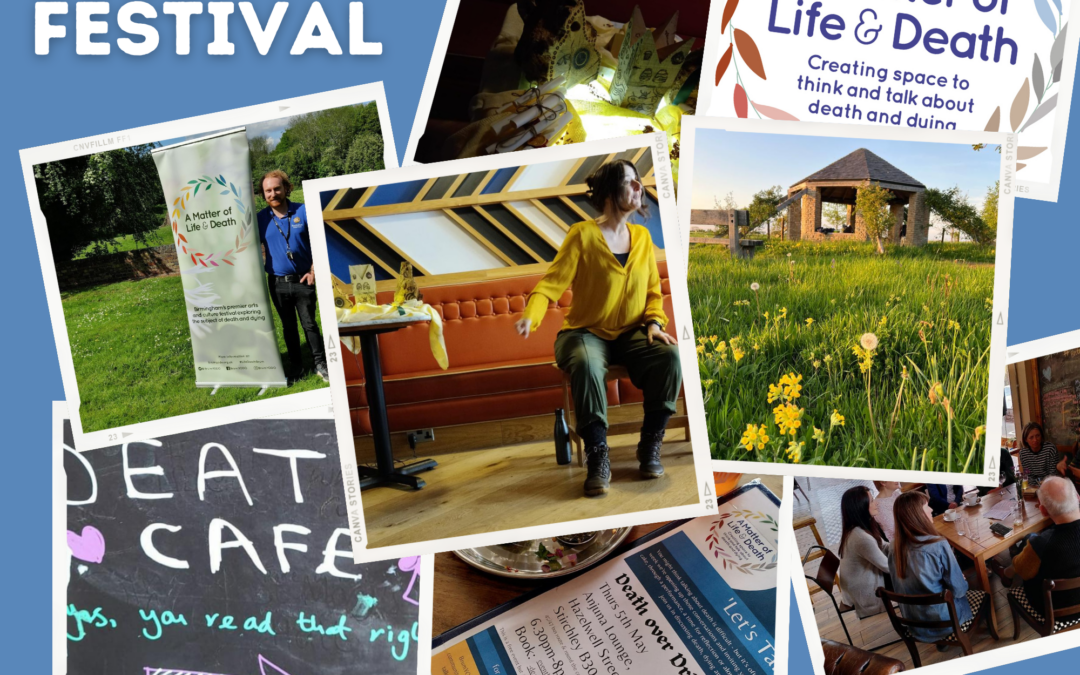 For our A Matter of Life and Death festival this year and to coincide with Dying Matters Awareness Week 2-7 May, we ran a number of free public events in a variety of indoor and outdoor settings across the city and way beyond. All involved a Death Café style conversation – a group led matter-of-fact chat between strangers over tea or something stronger, about death, dying and loss.

Who came? The keen, the curious, the happy, the sad, the bereaved, the lucky unbereaved, the young, the old – all just normal people keen to share thoughts and experiences, as well as to listen to and learn from others.  They came for themselves, for friends and loved ones, or in support of their wider communities. Some expected a heavy conversation but were pleasantly surprised that laughter featured alongside some tears and lots of meaningful conversation.

People shared thoughts on; what a good death might look like, why we find death so hard to contemplate, practical tips & care plans, suggestions of how to help others who are grieving; what helped them, what hurt them, shared worries about the implications for others on their own death, debated better and more welcoming names for Death Cafes, learned about cultural and religious differences, embraced the Arts as a way to express more significant conversation and much more.

Some that weren’t tempted were at least intrigued –  including the people who thought that ‘Death’ was a typo for ‘Deaf’ on a community centre noticeboard. It began a conversation…… For every session we ran – some large, some small – there was at least one person requesting more.

With thanks to all those who participated so open-heartedly and to our community supporters who hosted or co-hosted with us:

Death cafe style conversations need not be limited to just one week in a year. If you are interesting in hosing one of these important conversations and would like a bit of support doing so, do get in touch. We’d love to help.