Luke Jerram on bringing In Memoriam to Birmingham 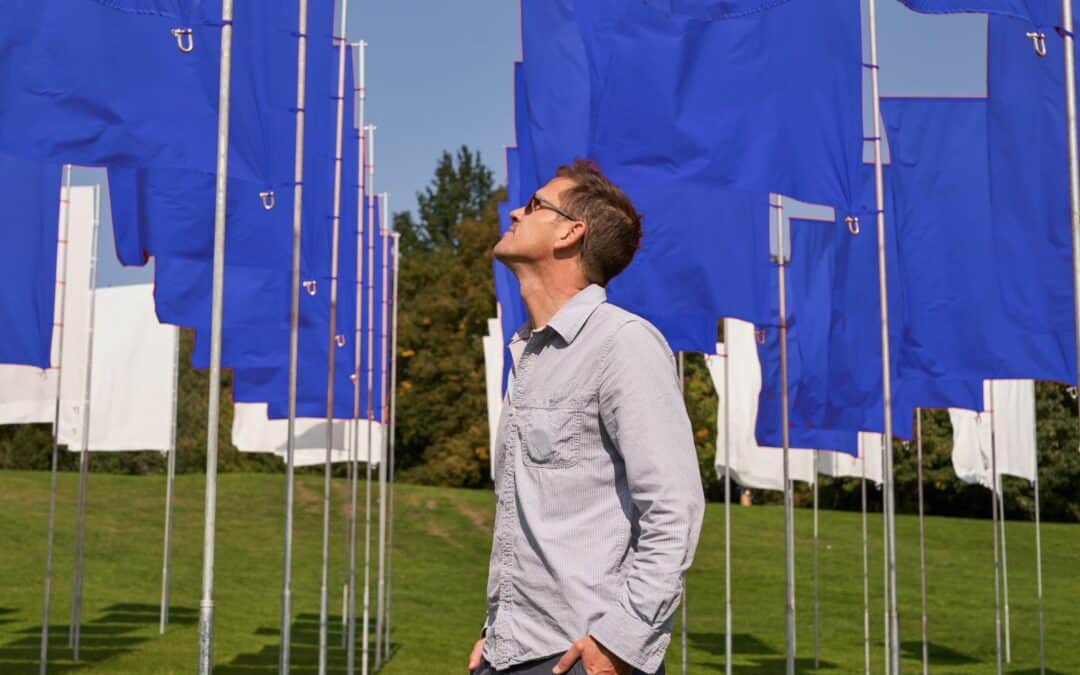 Artist Luke Jerram’s work In Memoriam, which comes to Birmingham in May, is his response to the thousands of deaths during the COVID-19 pandemic and a tribute to the many health workers caring for them.

Based in the UK but working internationally, Luke’s projects include sculpture, installations, and live artworks including Gaia, a floating globe offering an astronaut’s view of planet earth, and Park and Slide, a giant water slide placed in a high street in Bristol.

In Memoriam, which will be installed in Aston Park between May 8-16, is a touring artwork comprising 120 flags made from bedsheets in the form of a blue medical cross in a circle of white. Presented in Birmingham by BrumYODO, a community interest company dedicated to encouraging conversations about death and dying, and Birmingham Hippodrome, In Memoriam offers people a public space for contemplation and commemoration.

“When the pandemic hit, I thought the artwork could function as a memorial for all the NHS workers and everyone we have lost in the pandemic,” says Luke. “Since last year we’ve had more than 120,000 people die from Covid. The statistics are shocking and it just felt like the artwork resonated.”

As an outdoor installation, it has been possible to present In Memoriam in various locations and times during the past year.

“As a consequence of lockdown, we’ve all come to appreciate our green spaces and open vistas in a way that we’ve never done before. So creating an artwork on those locations has been ideal. The artwork could still be presented safely in lockdown because we all have access to open spaces. We’ve all needed these open vistas as a way to contemplate what’s been going on.”

In Memoriam was first presented in Antwerp in Belgium last August but because of travel restrictions Luke was unable to visit. However a month later it received its first installation in the UK at the Greenwich + Docklands Festival. It has since toured to the Norfolk and Norwich Festival, Newbury, Bournemouth Arts by the Sea Festival and Worcester Arches Festival.

People have responded in a very personal way to In Memoriam.

“The artwork has different meanings depending on what people bring to it,” Luke says. “I think adults are quite moved by it. Also suddenly people who are key workers and NHS workers have found somewhere they can have space for contemplation.

“I try to make artwork that can be read and appreciated at different levels. So if there are four-year-old children running between the flags having a nice time chasing each other that’s also absolutely fine.”

In Birmingham, In Memoriam forms part of A Matter of Life and Death – an annual festival held each year by BrumYODO as part of national Dying Matters Awareness Week. The festival presents an ambitious and diverse arts and community programme each year, supporting people to have open and honest conversation about death and dying. This year’s festival is held in partnership with Birmingham Hippodrome and also features an online events programme and a city-wide community activity inviting people of all ages to create their own In Memoriam flags to be shared in an online gallery.

“Since the artwork was last presented in October the entire country has seen another 80,000 deaths as a consequence of the pandemic so I think In Memoriam will be read differently this year from last year. It seems to have been a very hard winter and some people will respond to that.”

In Birmingham, In Memoriam is sited in the grounds of Aston Park and can be visited in line with Government COVID-19 regulations. Luke is keen to see the work in its new environment.

“When the artwork was presented on Bournemouth Beach in 50 mph winds it was very beautiful but it was also noisy and quite haunting. When it was presented in Newbury at the bottom of a hill it was a much calmer experience.”

Luke’s Museum of the Moon, a fusion of lunar imagery, moonlight and sound, was a highlight of Birmingham Hippodrome’s Summer in Southside Festival in 2019.

“The Hippodrome is a very established organisation and I feel proud to be working with them and with BrumYODO,” he says. “It’s great that they want to share my artwork in Birmingham again. I haven’t had an exhibition in Birmingham for a while and I’m really looking forward to seeing In Memoriam on this site.”

Lockdown has given Luke time to reflect on how he will work going forwards.

“In 2019 I had over 100 exhibitions in more than 30 countries around the world so there was a lot of firefighting, a lot of things that had to be dealt with, and it’s quite difficult to develop new artworks under those circumstances.

“In March when all my exhibitions and tours had been cancelled, it was actually quite nice to have some time to get my head down and focus on the development of this new artwork and push that through over a few months. In Memoriam gave me something to really focus on.

“This year has given me time to think and I’m definitely going to delegate a bit to help reduce my stress levels. I think the way I was operating wasn’t sustainable, I was burning out a bit.

“Then in November I went down with Covid and it knocked me down for two months. In fact I’ve still got tinnitus and my sense of taste is still not quite right however I feel very lucky that’s all that happened. I still went down with it quite badly but I could have been in real trouble. It has though affected my interpretation of the pandemic and the artworks I’m making about it.”

Luke has long been fascinated by the connection between art and science and, as a teenager, he had to choose between the two.

“I had a place at one university to study engineering and also had a place at another to study art,” he recalls. “I visited them both and the art college, which was in Cardiff, was a lot more of an exciting place to visit. These things are important when you’re 17!

“But actually my artwork still involves engineering and science. I’m always interested in doing new stuff and pushing the boundaries of a particular medium. I’m interested in exploring the edges of our perception and these artworks combine art with science.

“I think both artists and scientists are interested in exploring the unknown and interrogating the world and asking questions of the world. We are often asking the same questions – how does this work, how is it made, what does it look like, how does it function and then we just have different answers to the same questions.”

This blending of art and science can be seen in many of Luke’s works including his latest project, creating a glass sculpture of the Oxford-AstraZeneca vaccine. Five limited editions of the artwork, which at 34cm across is a million times larger than the actual nanoparticle, are being sold to raise money for the international charity Médecins Sans Frontières.

As a response to the pandemic, In Memoriam is very much a work of its time and Luke admits to being curious to how people will respond to it going forwards.

“I think the artwork will resonate differently in the future. It’s really interesting to see whether people will still be interested in this in two or three years’ time when the pandemic has ended. Maybe we will all have had enough of Covid and will just want to go partying and raving and celebrating and drinking and wanting fireworks. And then in ten or 20 years, when we have another perspective again, the artwork may still have a value but it will be very different.”

Sited in the grounds of Aston Park between May 8-16, In Memoriam can be visited free and in line with Government COVID-19 regulations. During the first weekend, May 8-9 between 11am-4pm, Aston Hall will open its Stable Yard Café for takeaways and host a barbecue for visitors to In Memoriam.

In Memoriam in Birmingham is supported by Arts Council England, Without Walls, Birmingham City Council, Aston Hall and A Natural Undertaking. In Memoriam was originally commissioned by Weston Arts + Health Weekender. Supported by Without Walls and FESSTIVAL.ORG. Informed by the Wellcome Trust-funded ‘Weather Lives’ project, led by Dr Cassie Phoenix at Durham University.