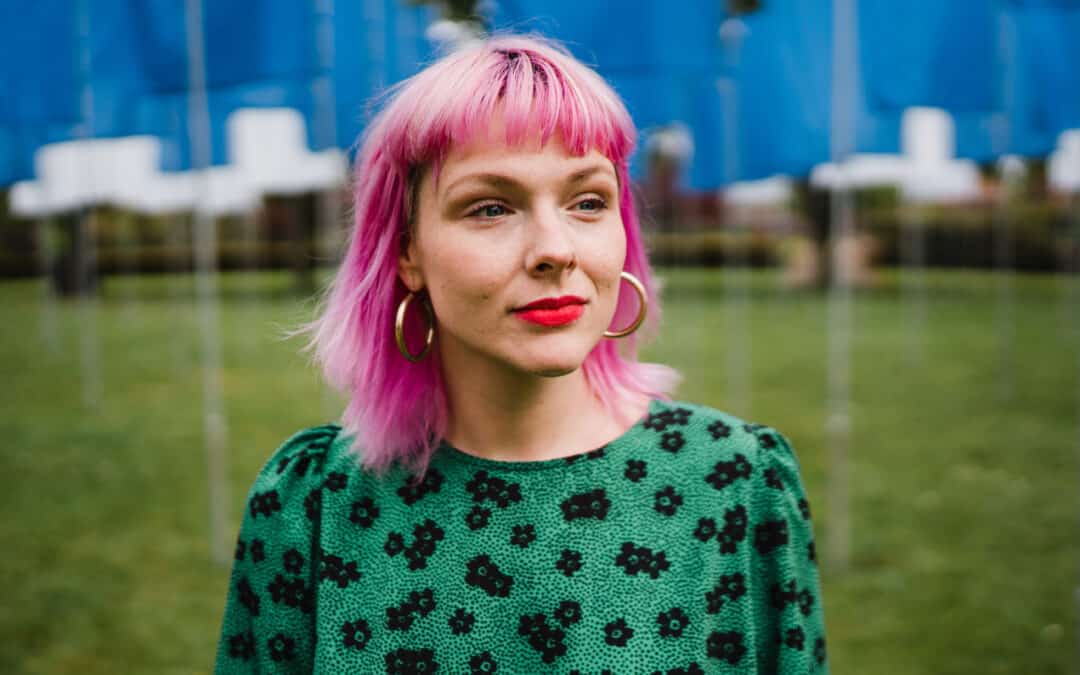 BrumYODO and Birmingham Hippodrome have commissioned Birmingham poet Jodi Ann Bickley to write a new poem to commemorate the installation of In Memoriam by Luke Jerram in the city.

Jodi founded the One Million Lovely Letters project in 2013 which has seen her hand writing more than 4,000 letters to people and releasing a best-selling book. She performed her poem In the wind at In Memoriam during its installation at Aston Park.

Jodi said: “The poem is about the memories and lives of the people the flags represent, that they are always there and aren’t erased by their deaths, they’ll be in the wind, in memoriam, everywhere.”

You can see a film of Jodie reading her poem here.

In Memoriam consists of 120 NHS bedsheets arranged in the shape of a medical cross. Coloured in NHS blue and white, the artwork is a commemoration of people who have died of COVID-19 and to thank the many front-line workers caring for them.  It was presented in Birmingham between May 8-16 by BrumYODO and Birmingham Hippodrome as part of A Matter of Life and Death Festival.

More than 1,000 people visited the artwork during its installation at Aston Park and hundreds more took part in the festival through remote community activities and online events.

Emma Scott, of Longbridge, visited In Memoriam with her family including children Stephen, aged ten and Denis, aged six. She said: “We came to pay our respects. It was quite an emotional experience but also very peaceful.”

Tahir Parvas, the walking and running coordinator for The Active Wellbeing Society (TAWS), created a film at the site which was shared on the society’s Facebook page. He said: “Our film is aiming to encourage people to walk through the flags and use that as a time for people to connect not just with people they have lost but also with being outdoors. Being around green open spaces is really good for people’s wellbeing.”

Birmingham St Mary’s Hospice Inpatient Nurse Jo Ferro said: “The flag-making was an inspired idea and very much needed to get conversations started about some of our most difficult, heart-breaking memories. It was emotional and cathartic and gave us space to pay tribute to the many amazing patients, friends or family members who have died. It also allowed us to share those rare but beautiful moments we have all experienced throughout the pandemic. Everyone who worked collaboratively on this project – both patients and staff – were very grateful to have this opportunity.”

Pupils at local schools including Braidwood Trust School for the Deaf and Queen Alexandra College created their own flags inspired by In Memoriam. At Wilson Stuart School in Erdington, 250 students and staff made flags which were then put together to create one artwork as part of their Eid celebrations. “This whole school collaborative piece thanks heroes that have helped during the pandemic as well as marking the loss of the many thousands of people from COVID-19,” said a school spokesperson

More than 200 people also attended online events during the festival including panel discussions, workshops, a Death Café and a Grief Gathering. A Matter of Life and Death is an annual festival taking place in Birmingham in May to coincide with Dying Matters Awareness Week, organised by BrumYODO – a community interest company dedicated to encouraging open and honest conversation around death and dying.

BrumYODO Director Antonia Beck said: “We were so pleased that so many people have been able to engage with In Memoriam in Birmingham either by visiting the installation in Aston Park or by taking part in our remote flag-making activity. Jodi’s poem is a wonderful way for people to keep connecting, providing a beautiful, poetic moment for Birmingham to reflect on the past year.”

In Memoriam in Birmingham is kindly supported by Arts Council England, Without Walls, Birmingham City Council, Aston Hall and A Natural Undertaking.

In Memoriam by Luke Jerram was originally commissioned by the Weston Arts + Health Weekender. Supported by Without Walls and FESTIVAL.ORG. Informed by the Wellcome Trust-funded ‘Weather Lives’ project, led by Dr Cassie Phoenix at Durham University.

Luke Jerram’s multidisciplinary practice involves the creation of sculptures, installations and live arts projects. Living in Bristol but working internationally, Jerram has created a number of extraordinary art projects over the last 25 years which have excited and inspired people around the globe. He is now known for his innovative arts practice and large scale public artworks, such as Museum of the Moon which has been experienced by more than 10 million people, has recently toured India with the British Council, been presented at the Commonwealth Games in Australia and exhibited in Aarhus, Denmark for the European Capital of Culture. www.lukejerram.com

BrumYODO is a Birmingham-based community interest company comprising artists, undertakers, palliative care professionals, hospices, solicitors and celebrants. BrumYODO believes talking openly about death helps us prepare for dying and loss. BrumYODO delivers life-enhancing events and work in partnership with others to design and create safe spaces for conversation. BrumYODO holds its festival A Matter of Life and Death each May but also has an events programme throughout the year. See www.brumyodo.org.uk for more information. BrumYODO is sponsored by SFE and STEP Birmingham.

Birmingham Hippodrome is an independent charity on a mission to enrich the cultural lives of the region. Since opening its doors in 1899, it has been proud to play an important civic role in the city, and firmly aligns itself to Birmingham and the wider regions evolving ambitions. Drawing no regular income from any public grant givers, Birmingham Hippodrome funds its wide-ranging and varied programme of theatre, dance, festivals, education and community activities through ticket sales, events and fundraising. Due to the impact of COVID-19, the venue closed on March 16, 2020 and is currently closed for live performance.  To learn more visit birminghamhippodrome.com