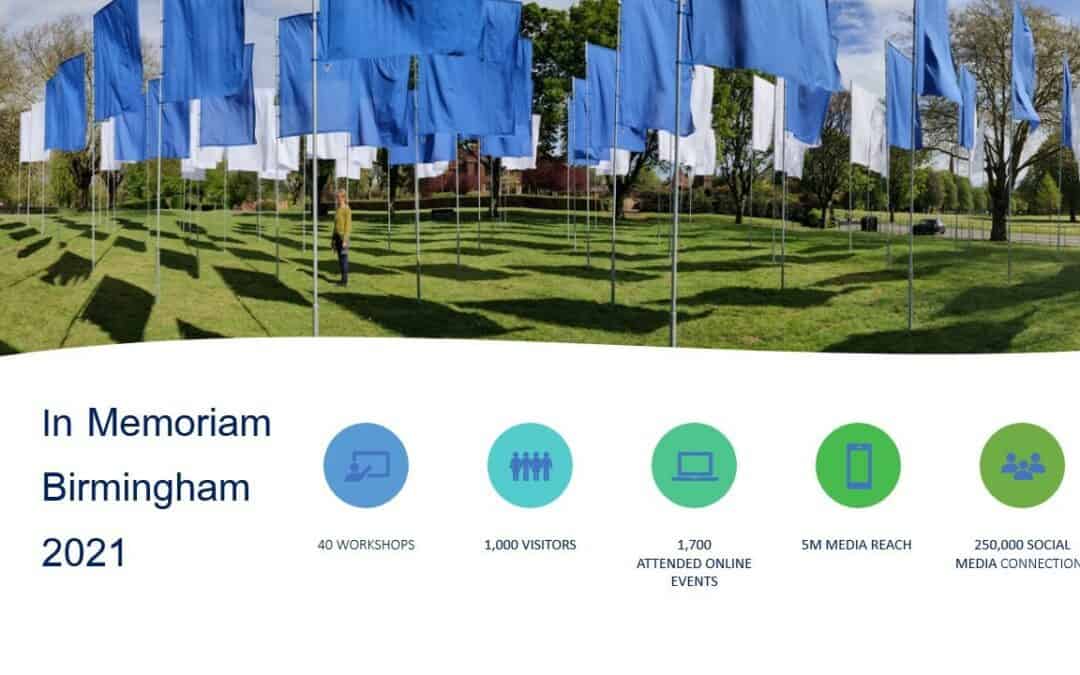 A young woman held her decorated flag to her chest and told me: ‘Thank you, this has really made me think about a friend who died last year. We couldn’t go to the funeral but making this flag feels like a way of paying tribute to her.’

It was a sunny Sunday afternoon in the grounds of Aston Hall and this woman was one of many people of all ages who had been taking part in a flag-making workshop organised by volunteers with BrumYODO.

Coinciding with the opening of the installation of Luke Jerram’s In Memoriam artwork, we had taken over a garden, installed some gazebos, commissioned artist Margaret Murray to facilitate the activities and were now busy chatting to people as they made their flags.

This activity was one of more than 40 workshops, many organised by our partners and local community groups– all aiming to encourage people to make flags in memoriam of someone they loved who had died and to chat about death, dying, memory, coronavirus or whatever else the activity inspired.

Nearly 900 people attended activities or made flags – many of which were then displayed on our online gallery and on social media. And more than 1,000 people came to visit In Memoriam, standing between the billowing flags and finding time for reflection – and this was despite us having some of the worst weather imaginable for a spring-time open air installation.

This engagement was just the tip of the iceberg – In Memoriam made such an impact on the city when, together with Birmingham Hippodrome, we pulled out all the stops working closely with the Parks Team at Birmingham City Council to bring it to Aston Park. A series of online community focused events were watched by more than 1,700 people who took part in debates and discussions including how the arts can help us create memorials and the impact of coronavirus on our attitudes towards death and dying.

Featured on television, in newspapers and magazines and online, our In Memoriam story reached around five million people with an additional reach of a quarter of a million through social media.

Planning and organising all of this activity was hard work for a small group of BrumYODO volunteers and Birmingham Hippodrome staff but so worth it. To know that children at a city centre foodbank, pupils in schools, patients and staff at local hospices and hospitals and visitors to Aston Park were creating special flags and having special conversations made it all worthwhile.

In Memoriam has moved on to other cities but its legacy remains in those conversations and in the flags. If you’ve not checked out our online gallery yet, give it a look and you’ll see artwork of all different shapes and sizes – each one lovingly created in memory.

With thanks to all our community partners and supporters.

In Memoriam in Birmingham was delivered by BrumYODO and Birmingham Hippodrome and supported by Arts Council England, Without Walls, Birmingham City Council, Aston Hall and A Natural Undertaking.

In Memoriam by Luke Jerram was originally commissioned by the Weston Arts + Health Weekender. Supported by Without Walls and FESTIVAL.ORG. Informed by the Wellcome Trust-funded ‘Weather Lives’ project, led by Dr Cassie Phoenix at Durham University.